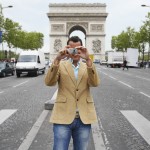 He had started the morning as just another tourist with a camera. He’d been snapping away at every landmark on his tour around Paris.  He was now walking the length of the Champs Elysees from the Arc de Triomphe, capturing on camera all he could of Parisian life.

He heard a car screech to a halt close by, and turned to see what was happening. A large man in black got out of the car, and ran towards him.He didn’t even have time to think what was going on as he was grabbed by the arm, and hustled into the back of the car. He tried to resist, but the man had him in a grip of iron and pushed him roughly into the back seat, where there was another man who held his wrist tight while the first man slammed the door shut and jumped back into the passenger seat. The car sped away as quickly as it had arrived. It had all happened in a matter of seconds.

Totally bewildered, Jack asked “What’s going on? What’s all this about? What do you want with me?”

“Be quiet!” said the man in black. “Give me your camera, before Henri over there blows your brains out.”

Then Jack noticed the gun that the other man was holding. He was not going to argue with that, and handed over the camera to the man in black, who took out the memory card.

“Here you are” he said handing back the camera. “Now get out of the car.”

Jack was stunned. He tried to memorise the car number, but it had all happened too quickly and he had fallen as he was bundled back onto the pavement. A passer by helped him up, but neither could understand what the other was saying. Everyone else carried on as if nothing had happened.

Jack returned to his hotel, where he told the concierge about his experience.

“Ah, you must have photographed the armed robbery in the Champs Elysees which has just been announced on the news. I will ring the police to let them know you were a witness.”

Written for Creative Writing homework – 400 words max, given the prompt line “He started the morning as just another tourist with a camera”.  Prize winning entry submitted to Wakeupyourmuse.com for the December 2011 competition.