Monica looked around her sitting room, satisfied. Everything sparkled and twinkled. 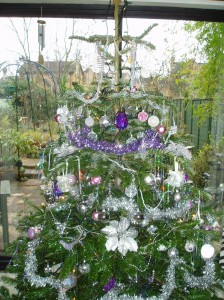 The frosted silver fairies hanging above the windows of her patio doors were gently twirling between the loops of silver beads which all glistened with a multitude of reflections from the lights above them. The fibre-optic twig tree which was standing on her sideboard, covered with silver tinsel and white frosted icicles, was twinkling away. The lights on the mantlepiece nestled amongst the branches cut from her yew tree in the garden, where she had placed robins and chaffinchs on fir branches with “snow” covered cones, around her model of an Alsation dog.

All looked beautiful. A silver and white wonderland. Jessica loved silver. Monica was really looking forward to Christmas this year. Her friends were coming for Christmas dinner and staying over until Boxing Day night. She wanted to make it a special Christmas for Jessica.  Monica poured herself a glass of Ginger wine – she was all set for Christmas.

The phone rang – unusual at this time of night. Not many people called her after ten o’clock. Monica had settled down on her sofa, and almost didn’t make it to the phone in the hallway. It was Barry.

“Can I pick you up on the way to the carol concert tomorrow night?” he asked. “Jessica said it would be better if we went together.”

“Of course, ” she said, wondering why it was Barry who was phoning her, not Jessica. “Thanks, that would be nice.”

“It will just be me, I’m afraid” said Barry. “Jessica is back in hospital. It looks like she may need another operation. We’ll know more after she has had her scan tomorrow.  She insists I still go to the concert though.”

Stunned, Monica searched for words to say. Jessica had been doing so well. She had bought herself a new flashy sportscar, and even last week had bought not just one, but four wigs to cover her own, once beautiful, now rapidly thinning hair. Only last Saturday she had been dancing to Michael Jackson at the Christmas party they had been to.  Jessica had asked the DJ to play the record specially for her.  Monica had hoped she was beating it – the Big C.

Monica and Barry spoke for another five minutes or so. She could hear the catch in his voice, and knew that he was dreadfully upset. She knew that the last thing he wanted to do was to go to a carol concert, any more than she did. It had been Jessica’s idea. She wanted to hear her spiritual healer sing in the choir. But Barry would do anything to please Jessica, and Monica had been going to support them both.

Finishing the phone call, Monica returned to her sitting room. The twinkling lights suddenly looked stupid. She switched them all off, sat down and wept.

In memory of a dear friend