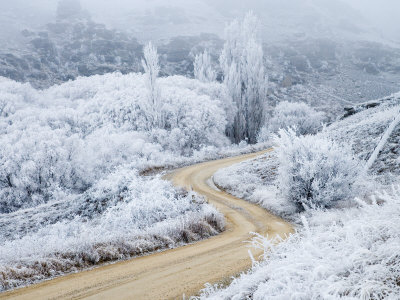 I awoke to an intense brightness piercing through a chink in my curtains. I sensed the promise of a brilliant view,  and as I opened the curtains to the cool white vista outside, a wondrous winter scene lay before me.

Everything sparkled. Jack Frost had visited overnight and painted my entire world white. Only the strangely tinged winding roadway provided tinted relief to the blanket of brilliant white. The haze in the distance merged into the milky sky, making the whole scene appear as if it never ended, and it all belonged to me for that moment. Oh how I wished I could paint!

I opened the curtains on the other side of my house. The sky seemed clearer here as the sun had started to break through. Nothing stirred. It seemed as if the whole world had stood still to enjoy this magical moment in time. But just then, a magnificent stag appeared and paused for a moment on his way through to the hoar-frosted wood, steam billowing from his mouth. He started suddenly, then pranced off again, leaving a trail of footprints in the glistening frost as he disappeared into the wood.

Now, in stark contrast against their surroundings, two people wrapped in dark anoraks and thick woolly hats walked into view with their dogs, black labradors on leads, which seemed a pity to me. The dogs would have loved a good run around in the snow-like thick coating of jagged frost. But I guessed they had taken this necessary precaution because of the wildlife that abounded the area here. Dogs caught worrying deer would get shot. I wished I could join them in their walk, but I had to go to work and I knew that I would have trouble starting my temperamental car in this weather. I sighed as I looked at my car in the driveway, glittering white, looking like someone had drawn artistic spiky patterns all over it.

Then a thickly frosted spider’s web caught my eye. What a work of art! My grandmother used to sit for hours crocheting delicately intricate tablecloths that looked like this. How amazing to think that a tiny spider had woven this beautiful masterpiece. She would miss her breakfast today though, any insect brave enough to fly in this cold would spot from miles away this ‘icing-sugar’ coated web.

Reluctantly I tore myself away from my vision of serenity, realising that my lengthy admiration of all this beauty had made me forget the grim reality of my impending working day and the meeting I had to attend to discuss my future with the company. I had to rapidly shower and dress, then rush through my breakfast before tackling the job of scraping the ice from my car windscreens. I knew I would arrive late for my meeting at work! Not much hope for my future at work then, but at least I would have more time to study this view!