The Hall retains many of its original features such as the stone flags, substantial beamed ceilings and an impressive covered courtyard. The main entrance to the Hall is through this courtyard, in which there is a resident barn owl, high up in the eaves to the left of the main entrance. On the right of this courtyard there is a table tennis table.

To the west of the courtyard lies the billiards room, at the back of the house, with a full sized billiard table, a giant leather sofa and a huge oak games chest.

The sitting room at the front is accessed from the billiard room and benefits from a large stone fireplace containing a wood-burning stove. There are two massive sofas and several winged arm chairs in the room with various bookcases and occasional tables scattered around. Incongruously, there is a huge modern flat screen TV to the right of the fireplace. Opposite the fire is a large window seat overlooking the front garden, with curtains that can be drawn across the front of the window seat.

The dining room on the east of the courtyard and at the back of the house, has a second wood-burning stove and curtained window seat. The room contains fine old oak furniture comprising a refectory table, long wooden benches, a couple of oak chairs at each end, and two massive dressers. A tapestry of a typical Scottish hunting scene hangs above one of the dressers. The heavy curtaining throughout these three rooms is tartan.

The dining room leads through to a large and well equipped farmhouse style kitchen at the front of the building, with its own large breakfasting table. A shower room and a utility or boot room flank the main stairway, under which there is a large storage cupboard which looks like it may have once led down to a cellar, but is now boarded up.

The first floor is accessed from the impressive central stone stairway, recently carpeted with a narrow ruby red carpet. This staircase serves the whole house, but there is a second service staircase which leads from the lobby with access to the side garden, between the kitchen utility area and the far end of the dining room. This staircase leads to the first floor east wing.  There is one twin-bedded bedroom at the top of this stairway, at the back of the house above the dining room which would probably once have housed the cook, or the butler. Appropriately, two of the single ladies shared this room, one of whom decided to take charge of the cooking – a veritable Mrs Bridges!

The hallway from the top of the service staircase continues to the remaining rooms on the east wing first floor. Here there is one small bedroom, now occupied by one of the single men and a family bathroom, both at the back of the house. There is also one large twin bedded room above the kitchen at the front, which is now occupied by the only married couple in the group and their Great Dane – they drew the short straw when the bedrooms had been allocated.

Two short flights up the magnificent main stone staircase which winds its way up the centre of the whole house, are the master bedrooms in the west wing of the house. At the front, above the lounge is a huge room containing a stone fireplace with a small stove and a large mirror above, a giant carved four poster bed and several large pieces of old oak bedroom furniture.  This room was allocated to an unmarried couple by the aforementioned straw drawing method.

At the back of the house above the billiard room, there is another, equally large room with another carved “fertility” bed, a velvet sofa and matching chair, and an assortment of oak furniture.  The other unmarried couple in the group had won the draw for this room, which leads to an en-suite bathroom, also accessed from the hallway, and which is shared with the couple in the room opposite.

Up another two flights of the main staircase, is the second floor.  The east wing contains a large room with three single beds at the front of the house which three single ladies now share.There is a small lobby entered by a door from the landing which leads to small double room at the back with another single lady allocated to it and a very small room next to it, for the other single man.  All five occupants of the second floor east wing were to be sharing the bathroom on that floor, next to the great staircase.

At this point, it should be noted that none of the bathrooms have a shower in them, the big deep baths have an old telephone-style hand shower attachment, but the only real shower in the house is the one in the shower room on the ground floor. Most of the men prefer a shower, but a couple of ladies need a shower because they cannot get in or out of a bath.

Across the landing, on the west side of the second floor there is a large room at the front which houses another very old carved oak four-poster bed, large oak wardrobes and a large dresser. There is a fireplace, with a small stove to the right of which is the door to the small lobby, leading to the landing and to a recently built en-suite bathroom, in space borrowed from the room at the back of the house. The en-suite also has a door to the bedroom at the back of the house. The room is occupied by couple.

The room on the west side at the back of the house curiously has a long ruby red velvet curtain hanging in front of the door to the room. This room, although smaller that the room below, due to the recent addition of the en-suite, contains more modern oak furniture but has two large single beds.  There is also a door leading to the shared en-suite bathroom. The room is now occupied by another couple.

The stone staircase continues up another short flight of stairs to a stone plinth, almost at the top of the raftered roof space, on which stands an eerie looking stone model of a cavalier’s head and shoulders There is no access to this area as a padlocked iron gateway bars the route up the stairs, but at night, lights are trained on this cavalier’s head, and the whole area appears very spooky. Was this cavalier the ghost that has been spoken about in the local village?

In addition to the many paintings throughout the house, on the wall by this staircase, next to the curtain hiding the door to the back bedroom, there is a particularly captivating old portrait of a beautiful ringletted woman in a low-cut voluminous white gown and a pearl necklace. Her eyes would seem to follow one everywhere. Is the portrait of the beautiful woman in white the cavalier’s lady love for whom he was supposedly searching?

Hardstonecourt Hall is very remote, there are no other buildings in the surrounding area for at least 6 miles, except for the converted stables which are down the driveway and about a hundred yards down the lane. There was another couple in the group renting these stables, with another couple of ladies as there was no more room in the main house, and they preferred to do their own thing most of the time. 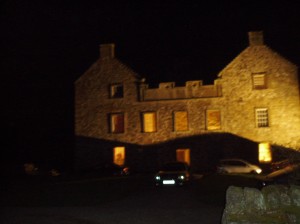